If you ever hear the call of the wild becking then Pokhara tour is for you. Pokhara is the adventure capital of Nepal, and rightfully so. Pokhara is a gateway to some of the world famous trekking routes in Nepal like Annapurna Base Camp, Ghorepani Poon Hill trek, Mardi Himal trek, Jomsom Muktinath trek, and Upper Mustang trek.

If these long treks aren’t your cup of tea, however, then there is still plenty to do around here. Pokhara is not called ‘the City of Lakes’ for no reason. You can take a casual stroll, swim, or boat on any of the lakes here. The most popular one, however, is the Phewa Lake.

Phewa lake has become so famous in fact, that the northern side of the shore has become a tourist district of some sorts and is famously known as Lake-side. This is where the most happening restaurant and hotels of Pokhara are. Tourists enjoy water-sports and fishing here. The vibrant life in the Lake-side is not just for partying. Here, you can meet tourists from all around the globe and swap your awesome travel stories with.

Owing to the large number of lakes, Pokhara also has numerous cave systems throughout the hillside. Cave exploring is another activity that you can do here. Gupteshwor Mahadev Cave, The Crazy Cave, Siddheshwar Cave and Mahendra Cave are among many cave systems that give you a mystical experience. The caves conjure up fantasies of enigmatic cities hidden underground.

If you have the energy to keep up with Pokhara’s wild side, then there is plenty to do around here. The second highest Bungee point of the country lies here and is increasingly becoming famous.

Get thrilling experience of Zipline

Pokhara has also recently introduced a zipline that runs for a whopping 1.8km and with a vertical height of 610m! Reaching speeds of up to 120km/hr, this zipline claims to be the fastest and steepest zipline of its type in the world!

From Bungee Jumping at a height of 80 metres to paragliding in Sarangkot. From going down the world’s steepest zipline to mountain biking through lush green hills. From fishing in the serene lakes to hiking the world famous Annapurna circuit- Pokhara is THE place for adventure lovers from all around the world.

Visit the hillside of Pokhara

If the nights of wild partying and days of hair raising adventure has taken its toll on you then you can also take a short hike around the surrounding villages like Dhampus, Sarangkot hill or Kahun Daada.

The quaint villages lie far enough from the hustle and bustle of main Pokhara that this will be a perfect opportunity to enjoy spectacular views of the surrounding villages and mountain peaks. Rafting in the gentle Seti river takes you through untouched vegetation and also brings you closer to the birds in the habitat.

Budget accommodation and homestays can be found in the villages. This will give you a more authentic local experience rather than staying in the touristy area. Unlike other major cities around the world with their fast paced life, Pokhara is somewhere anyone can rejuvenate themselves. Imagine falling asleep with the sounds of nature playing a full orchestra around you. Think crickets, birds, together with the sweet sound of a nearby river lulling you to sleep. Nights under the twinkling stars is the cherry on the cake when it comes to offering you the most exotic experience imaginable. Quite frankly, Pokhara has it all.

Nights under the twinkling stars is the cherry on the cake when it comes to offering you the most exotic experience imaginable. Quite frankly, Pokhara has it all. Nepal Tour Guide’s All Nepal Tour covers the highlighted places like Bandipur, Palpa, Pokhara, Chitwan and Lumbini, and is designed so you can get a complete experience of Nepal. This tour combines sightseeing of world heritage sights 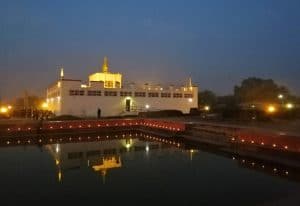 Situated in southern Nepal close to the Indian border, Lumbini is a historical delight for travellers. Surrounded by more than 100 ancient monuments, temples, international monasteries, and the likes, Lumbini is an open museum. Listed as a World Heritage Site Nepal Tour Guide’s Kathmandu Valley Tour takes you to the prehistoric sites in three districts, namely Kathmandu, Bhaktapur and Lalitpur. This tour not only showcases the rich culture of the Nepalese people but also takes you back in time through

If you ever hear the call of the wild becking then Pokhara tour is for you. Pokhara is the adventure capital of Nepal, and rightfully so. Pokhara is a gateway to some of the world famous trekking routes in Nepal like Annapurna Base Camp, Ghorepani Poon Hill